This British-Nigerian whiz kid and math genius Esther Okade enrolled in college at 10. Armed with all that knowledge of numbers, she wants to own a bank.

For most six year olds, leisure time would mean quality screen time with favourite cartoon characters. Or it could mean playing games. What you won’t hear is that they’re studying for their GCSE, an exam usually for 14-16-year-olds. But the above scenario is the reality of Esther Okade, British-Nigerian whiz kid and math genius. 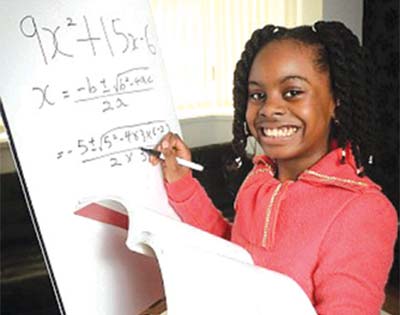 Nigeria’s Esther Okade, who last year gained admission to study for a mathematics degree, at the United Kingdom’s Open University at the age of 10

Esther lives with her family in Walsall, in the West Midlands. She has always been interested in Maths. She wrote her first Math GSCE exam, a British high school qualification, at just six. She came out with a C grade. A year later, she outdid herself and got the A-grade she wanted. Then in 2014, she scored a B-grade when she wrote the Math A-level exam.

In 2015, at the age of 10, Okade enrolled at Open University (a UK-based distance learning college). She went in to study a university math course. Esther began getting straight A’s as one of the youngest undergraduate students in the country. Three weeks after enrolment, she was already top of the class, receiving a perfect score on her first test, which she said was “easy.”

At the time of enrolment, Esther said:

“I want to (finish the course) in two years. I actually wanted to start when I was seven. But my mum was like, “you’re too young, calm down.” So I’m going to do my PhD in financial maths when I’m 13. I want to have my own bank by the time I’m 15 because I like numbers and I like people and banking is a great way to help people.”

Esther Okade Is Her Mother’s Daughter 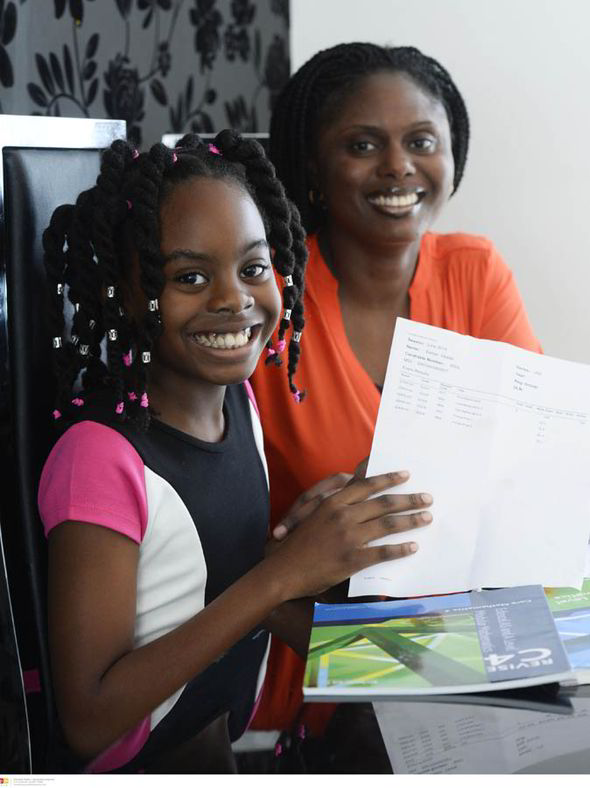 Some may credit her mathematician mom, Omonefe “Efe” Okade, but going to university was Esther’s idea. Her mother, Efe Okade, noticed her daughter’s flair for figures shortly after she began homeschooling her at the age of three.

The most inspiring part of Esther’s story is that she’s not taking advanced math courses because she can. She’s doing it because she sincerely wants to. Math is her passion the same way sports or music is for other kids. She told CNN:

“The course is so interesting. It has the type of maths of I love. It’s real maths — theories, complex numbers, all that type of stuff. It was super easy. My mum taught me in a nice way.”

She is one of the youngest college students in history. Esther is also writing a series of math workbooks for kids called Yummy Yummy Algebra. She explained the series to CNN:

“It starts at a beginner level — that’s volume one. But then there will be volume two, and volume three, and then volume four. But I’ve only written the first one. As long as you can add or subtract, you’ll be able to do it. I want to show other children they are special.”

Esther told CNN about her dream of opening a bank.

“I want to (finish the course) in two years. Then I’m going to do my PhD in financial maths when I’m 13. I want to have my own bank by the time I’m 15 because I like numbers and I like people and banking is a great way to help people.”

Also read: Teach Your Kids These Valuable Lessons From The Lion King