Cobhams Asuquo’s Wife And How She Discovered Son's Blindness

She disclosed this in the latest episode of Tito Idakula‘s vlog ‘My Jesus Experience’, where she chronicled her Christian life and foray into marriage.

Ojuolape, explained that she felt a cloud of uneasiness hovering over her when her son was pronounced blind by doctors both local and those outside the country.

In the emotion-riddled video, she narrated how she lost her struggles to correct the blindness of her son, even after several efforts. 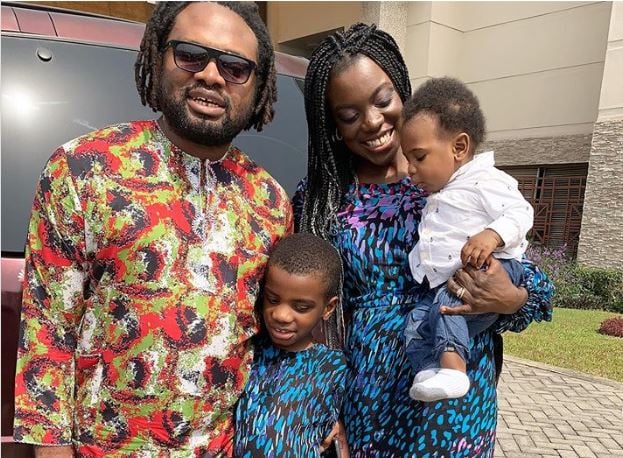 Ojuolape Asuquo, wife of Cobhams Asuquo, Nigeran-born songwriter, has broken the silence on how she discovered about her son’s blindness four months after birth.

According to her, she was shocked the doctor told her during one of her routine visits to the hospital that her son’s eyes were “not following”.

“Everything was so smooth. And then fast forward to four months after my son was born and the doctor was like ‘his eyes are not following’ and I was like, ‘What do you mean he’s not following?,’ she asked.

“And then suddenly, as a mother, your heart just starts palpitating.”

The situation, she said, “brought a lot of fear.” “It’s a mixture of emotions,” she said while revealing events leading to the eventual blindness of her son.

She also disclosed that her son’s blindness made her ask loads of questions about her spiritual life.

“I asked myself: Is it happening to me? Am I in a nightmare? What’s happening? I still feel like till day,” Ojuolape said.

She, however, stated that she had moved on, noting that the development had further strengthened her faith in God.

She added that her boldness to share her experience in the video was indicative of how well she has been able to manage the traumatic feelings that came with her son’s blindness.

Urging others to borrow a leaf from her case, Ojuolape said genuinely serving entails being ready to brace the odds. She enjoined others passing through challenging not to lose their faith in God.

Ojuolape’s marriage to Asuquo has been a source of inspiration to many, with the happily married couple always seen flaunting the family pictures online.

Her husband, who is also blind, has also continued to pull the strings with his creativity as a songwriter/music producer/singer.

Watch the video below: