Until now, Africa had been spared the rapid spread of COVID-19, which has infected at least 132,000 and killed nearly 5,000 worldwide.

As COVID-19 in Africa continues to spread to more regions, leaders are responding swiftly to the pandemic. Senegal’s President Macky Sall on Saturday ordered all schools and universities closed for the next three weeks. He also ordered all religious festivals cancelled in response to a coronavirus outbreak that has infected 24 people in the past two weeks.

Senegal is the first sub-Saharan African country to close its schools; according to a list compiled by U.N. cultural agency UNESCO. As of Friday, 39 countries had closed schools nationwide; affecting over 420 million children and youths, UNESCO said.

Since Thursday, 17 contacts of a man who returned from Italy to the city of Touba, have tested positive. Touba was also scheduled to host a religious festival later this month. The man’s two-year-old baby was one of three new confirmed cases on Saturday, the health ministry said.

“With the appearance of a hotbed of community transmission in Touba, I instructed the government (to adopt) a contingency plan to prevent the propagation of the epidemic,” Sall said after a meeting with his advisers. He added that the army would help build mobile hospitals.

Senegal has confirmed the second most coronavirus cases in sub-Saharan Africa, behind South Africa, which has reported 38. Africa did not record its first case until Feb. 28 in Nigeria, but there are now dozens of cases across at least 16 countries. Rwanda and Namibia both announced their first cases on Saturday. 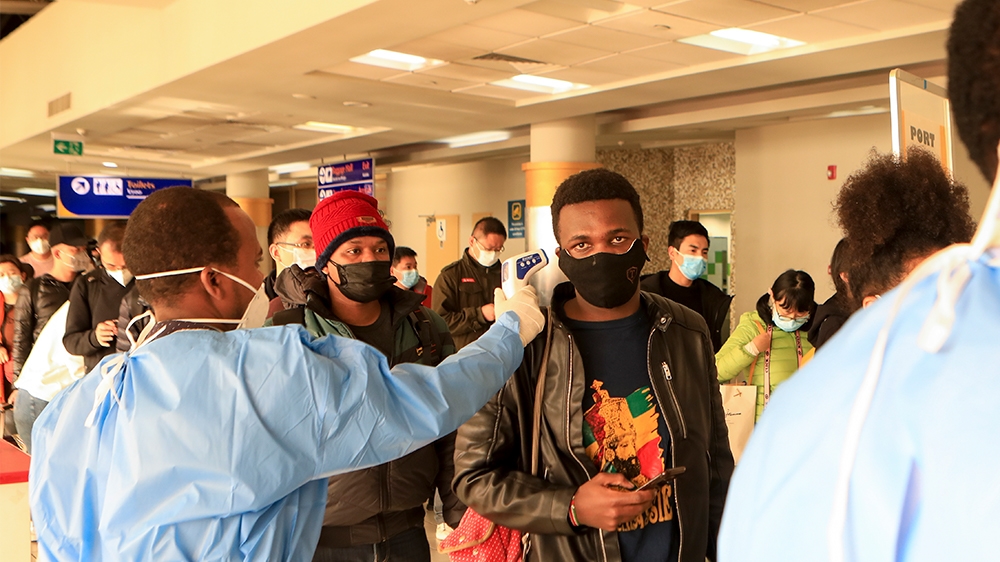 Kenya, Ethiopia, Sudan and Guinea announced their first confirmed cases of coronavirus on Friday; the disease has now spread to at least 18 countries in Africa.

Other African countries that reported cases of the disease are Morocco, Tunisia, Egypt, Algeria; Senegal, Togo, Cameroon, Burkina Faso, the Democratic Republic of the Congo (DRC), South Africa, Nigeria, Ivory Coast, Gabon and Ghana. Most of the countries’ totals are still under 50.

Countries are using rapid testing and implementing quarantines to limit transmission. But there’s a growing concern about the continent’s ability to handle the disease. In the Kenyan capital Nairobi, authorities banned all major public events and said they would restrict foreign travel.

The mayor of Ethiopia’s capital Addis Ababa urged citizens to avoid close personal contact; but the health minister said there were no plans to cancel flights. Most of Africa’s reported cases were foreigners or people who had travelled abroad.

Kenyan Health Minister Mutahi Kagwe on Friday said their first case, a 27-year-old Kenyan, was diagnosed on Thursday after she travelled home via London on March 5.

He said the government had traced most of the people she had been in contact with; including fellow passengers on her flight, and a government response team would monitor their temperatures for the next two weeks.

The Ethiopian case was a 48-year old Japanese national who arrived in the country on March 4, the health ministry said.

Guinea’s first case was an employee of the European Union delegation, the EU delegation said.

Sudan’s first confirmed coronavirus case was a man who died on Thursday in the capital Khartoum.

Only five people have succumbed to coronavirus so far – all in North Africa; with the Sub-Saharan region recording no deaths and very low numbers of confirmed cases.

Coronavirus In Africa: How To Prevent Infection

The Nigerian government listed the following precautions in a press statement:

The minister also warned Nigerians not to spread or believe false unconfirmed reports on social media.

Also read: Why You Should Not Make A DIY Surgical Mask During The Coronavirus Outbreak