‘I can’t Do Without It’ — Woman Spends £8,000 On Addiction To Eating Baby Powder Lisa Anderson, a 44-year-old woman from Piagnton, Devon, is suffering from a rare health disorder which makes her crave eating baby powder. Talcum powder — made from talc — is a baby moisturizer used to prevent rashes. The product is considered poisonous when inhaled consistently or consumed.

Anderson’s rare condition started in 2004 when she suddenly developed an “overpowering” urge to eat the powder after using it on her young son following a bath.

“I’ve always had it (talcum powder) in the house and would douse myself with it after having a bath or shower. I’d use it on the kids after giving them a wash no problem,” Devon Live quoted her as saying.

“And then one day I remember being in the bathroom and the smell was just overpowering. There was a bit of dust that had come off the top of the bottle.

“I had this sudden urge to eat it and I just couldn’t fight it. I just licked it off my hand and really enjoyed it. It just hit this spot. It was satisfying a craving I never knew I had.”

Since then, it has become an addiction to the mother-of-five, who admits taking it after every 30 minutes and sometimes in the night.

She stated that her longest stay without it has been two days. She has since spent an estimated £8,000 on the baby powder, sneaking to the bathroom to scoff it off the back of her hand.

Anderson said she kept her habit secret for a decade before confiding in her ex-partner — who was said to have stormed into the bathroom one day after growing suspicious of her regular visits. 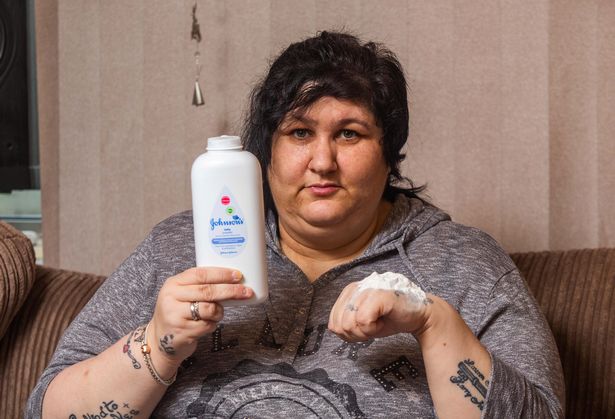 Eating Baby Powder Might Be Caused By Pica Syndrome

Medical sources told her she could be suffering from pica syndrome; a psychological disorder characterized by an appetite for substances that are largely non-nutritive.

“I do get it’s a bit weird – but it just has this nice soapy taste,” she said.

“I can get through a 200g bottle in a day but the bigger ones I get through about one-and-a-half a week. And I remember getting really drawn to its smell. Now I can’t do without it.

“I go up and get some every half an hour. I can’t really go half an hour without it. The longest I’ve been without it is two days. That was the worst time of my life. I hated it.”

She is said to have been referred for counseling after visiting a doctor. Her counselling is also due to start this month.

The International Agency for Research on Cancer has previously ruled talc as possibly cancerous to humans based on a range of studies.

A study carried out in the US in 2016 found a 33 per cent increase in the risk of ovarian cancer with genital talc use.