The Lagos State Government is clearly taking the lockdown very seriously and will go to great lengths to enforce it.

The Lagos State Police Command of the Nigerian Police Force has arrested popular Nollywood actress Funke Akindele, according to Punch NG. The arrest came after she hosted a house party; an act violating the Federal Government’s lockdown order.

According to Lagos State Police spokesman Bala Elkana who confirmed Akindele’s arrest: “The attention of the Lagos State Police Command was drawn to a viral video showing a large number of persons mainly in the entertainment industry in an Estate; along Ajah, Ibeju-Lekki axis, Lagos celebrating a birthday party organised by Funke Akindele Bello and her husband. 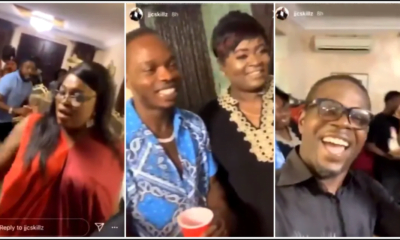 “Police detectives from the State CID Yaba were promptly drafted to the location. And Funke Akindele was arrested.

“Investigation is ongoing, efforts are intensified to arrest the remaining persons in the video, among whom are Azeez Fashola a.k.a Naira Marley and Abdul Rasheed Bello a.k.a. JJC Skillz.

“They are in their best interests urged to report at the State CID Yaba on Monday 6th April, 2020; or risk being declared wanted,” he said.

Funke and Skillz hosted friends to a house party on Saturday, April 4th, to celebrate the Nigerian rapper's birthday. The couple excitedly shared videos and photos of the house party on social media; an action that quickly met with heated backlash.

After a series of tweets targeted at her, the Nollywood actress decided to clarify the issues surrounding the house party. So she recorded a video, where she explained her side of the story.

The Jenifa's Diary actress explained that the attendees of the party were all at the estate long before the lockdown. They were all colleagues and friends of her family; who were working on a project together, and they decided to remain in the studios for the duration of the lockdown.

According to her, some of the people present at the party have been in the Estate for months, weeks or days before the president announced the lockdown.

In the recently uploaded video, Funke Akindele apologized to her fans. This was because they assumed that the house party was against what she stood for as the ambassador for the Nigeria Centre for Disease Control, NCDC.

View this post on Instagram
I hear you all and I acknowledge all your honest feedback.  also thank you for your concerns, well wishes and calls. I am sorry and hope this video offers some explanation. Please stay safe. And God bless. @lagosstategovt
A post shared by Funke Akindele Bello (@funkejenifaakindele) on Apr 5, 2020 at 6:33am PDT

Funke Akindele has appeared in government-sponsored and private adverts to champion the cause of social distancing and handwashing; actions geared to fight the pandemic. Social media users called her actions irresponsible, saying it was a wrong move by the actress. The Twitter users said the party should not have held.

To add to this, musician Naira Marley just returned from the United Kingdom. And he was present at the house party which had over 20 people in attendance.

Also, another top Nollywood actress, Eniola Badmus was also present. According to the Twitter users, it shouldn’t have been from Funke Akindele as she is the brand ambassador of NCDC and Dettol; meaning she should lead by example.

But there are unconfirmed reports that the NCDC has sacked Funke Akindele-Bello as its Ambassador; even as it removed her COVID-19 promo video from its website.