Men in Mourning: How a Man Handles a Miscarriage

Is miscarriage as traumatic for men as it is for women?

Miscarriage is one of the most painful experiences a woman can go through. Women have described it as “crushing” and unfathomably painful. And while everyone recognises the woman’s suffering, and the emotional and physical torment she goes through, what’s it like for a man? Has anyone asked how a man handles a miscarriage?

How a man handles a miscarriage

When Mark Zuckerberg opened up about his private grief after his wife went through three miscarriages, people were taken aback by his honesty and openness. Admitting to the public that “It’s a lonely experience,” and that he was struggling on his own, was an eye-opener. The pressure of gender expectations has forced men to push their emotions back and “hold it together”, but in this honest post, we could see the grief behind the stoic, masculine veil.

Men are the forgotten grievers and silent sufferers, says one psychologist. Their wives or partners get the attention because it is often a medical crisis — and the fact of the matter is, it physically happened to the woman. When a miscarriage happens, women show their emotions and speak about their grief intensely as friends and family rush to the woman’s side to offer comfort. But what many of us tend to forget is that a failed pregnancy happens to men, too — not just the one who carried the foetus.

How do men handle pregnancy loss?

Each situation is unique. Research shows that men process the emotional trauma of pregnancy loss differently than women, and differently from other men, too.

Expressing loss is a far-fetched idea for men. Most men are afraid that if they show hurt, sadness or any negative emotion, it might only make the wife feel worse. After a miscarriage, Actor Alec Baldwin expressed how heartbreaking the loss was for him, but that he was primarily worried about his wife, Hilaria. “My wife’s happiness is my prime concern,” he said in an interview. And so men like Alec put their guard up and try to stand strong as pillars of their families. Men are expected to support and encourage and comfort. Even when he is just as broken, discouraged, and aching. Often, men are too busy helping their wives cope with their feelings that they neglect their own. They only begin to feel the pain, when the wife’s emotional wounds begin to heal.

Men also suffer from anxiety and depression, but they make a decision to display less grief, if any at all. Miscarriage brings about self-blame in women, and so husbands or partners feel the need to be “stronger” and offer unwavering support. There is just no time to grieve actively and “out loud”. A study in the United Kingdom found that men grieve at less consuming levels and for shorter periods of time. Men are vulnerable to feelings of despair and difficulty in coping as much as women, but they have to lock these feelings in a box and kick it under the bed, until it is ready to be released.

Men seek support and comfort, too. When family and friends flock to offer comforting words to the woman, asking her how she’s feeling and praising her for being brave and all, they do not realize that the husband or partner is hurting, too. People forget there is a man in this partnership, holding the woman’s hand — and that he, too, lost a child. While not wanting to seek attention, the male partner is affected by a  miscarriage just as much. What’s more, according to a survey conducted by the UK Mental Health Foundation (2016), men are less likely to seek medical support. 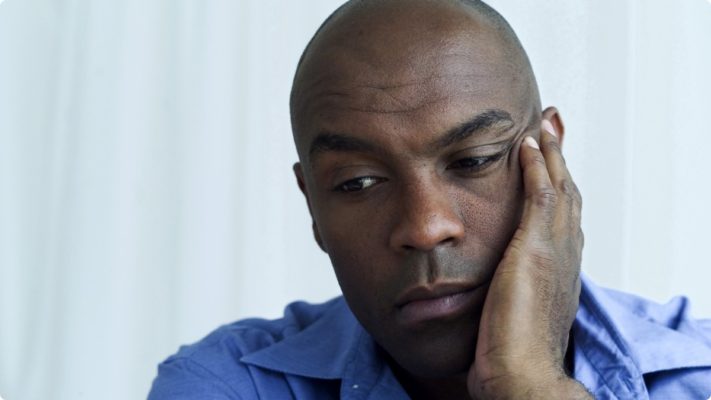 What psychologists are telling men is that it is okay to grieve. Contrary to what the strong, silent male stereotypes dictate, people expect men to grieve when a pregnancy ends. The loss is heartrending, and so you are allowed to feel lousy, sad, devastated. The world is not all right… for a moment.

Mark Rowland, Director of Communications and Fundraising at the Mental Health Foundation-UK stresses that men need to feel more able to share their feelings and emotions when they are vulnerable. This is an important first step in preventing mental health problems. Men need to acknowledge the pain before they can find ways to heal.

How do men begin to heal? If you are going through the pain and loss of a miscarriage, here are a few things you can do:

One of the most important steps to healing after a perinatal loss is acknowledging that however brief it was, the baby lived. Accept the deep sadness and sense of loss. Masking the pain will only keep it at bay for a limited time. Don’t hide the tears; cry together with your partner if you must. Sometimes it is just what’s needed, advised The Miscarriage Association – UK, in their published guide for Men and Miscarriage.

Couples should establish a safe space to communicate

Women should acknowledge their partner’s grief, too. Tomas (not his real name), 40, from Quezon City, Philippines, went through a miscarriage and shared that he was mourning the loss of his family’s hopes and dreams, which he felt died along with the baby. Yet he refused to share these feelings with his partner because it was difficult, and he did not want to appear vulnerable and powerless. But over a month after the loss, when he decided to open up to his wife about how the miscarriage had gravely affected him, a weight was lifted off his chest. Of course, the pain did not magically disappear, but there was an unspoken truce from grief and a quiet signal to move on with their lives. Talking made a world of difference.

According to The Miscarriage Association, “Talking is probably the most important thing that either of you can do. It can help you both come to terms with what has happened and to make sense of your situation.”

It is critical that men recognise that they, too, need help when considering how a man handles a miscarriage. The Miscarriage Association, explains that “It is important to recognise that if you feel you have to clamp down on your emotions, you may find you have unexpected feelings of despair and difficulty coping several months after the event.” Grief can wriggle its way out of your head, and manifest in the most unpleasant scenarios. Men are allowed to feel despair, uncertainty and grief. But how do they know what to do next? This is where help and support come in. It can be helpful for men to talk to other men to see how a man handles a miscarriage, others who have their own hushed backstory to tell about their partner’s miscarriage. The loss may be too painful to share, but men need to know that there is no shame in voicing out heartbreak and allowing others to comfort you. In a news article from the Postpartum Wellness Center, clinical social worker and founder Kate Kripke, writes, “We need more outreach to help men with loss and to get the right kind of support. Pick the resource or support that works best for you: family, friends, work colleagues, or health professionals, support organisations, websites and information leaflets, all have something to offer.

Accept that you and your partner are different

You have different ways of coping with loss. This is normal and it is not necessarily a bad thing. Rowland stresses that couples can still support and understand each other despite their differences.

Acknowledge this and find ways to revisit your relationship with your partner. Communication is key, and supporting each other is one good way to strengthen your bond, says Kripke. Truly so, hardships can either break a relationship, or bring a couple closer together.

In his Facebook post that has reached over 2 million likes so far, Mark Zuckerberg candidly wrote: “Most people don’t discuss miscarriages because you worry your problems will distance you or reflect upon you — as if you’re defective or did something to cause this. So you struggle on your own.” He went on to say that discussing these issues “doesn’t distance us; it brings us together” and “creates understanding and tolerance, and it gives us hope.”
Not too many people talk about it, but you can be the one to change this.

Men want to, and can be strong for their wives, without overlooking their own pain. It helps to speak of love, from a place of love and for love. It is during the most difficult times that there really is no other answer but love. Be there for each other let your wife or partner know that you will be at her side no matter what. You’ll also learn how a man handles a miscarriage along the way.