The Ned Nwoko Wedding To Regina Daniels Provoked Many Reactions 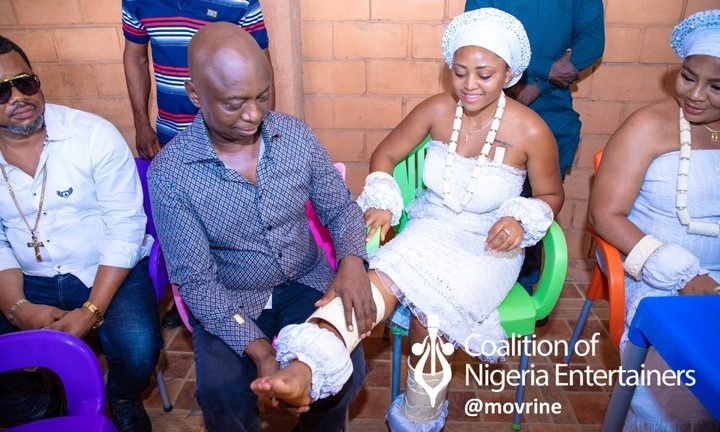 It all began with an uproar on Instagram after the actress made a post showing off the 100-million-naira house that she gifted her mother. Weeks later, we heard that the senator-elect gifted the house to Regina. Not long after, the actress began to post several expensive cars, all gifts from the billionaire. However, in spite of the rumours of their marriage, she always denied their marriage.

However, on the 26th of May, several videos and photos flooded the internet, confirming the marriage. Many Nollywood stakeholders attended the very colourful wedding, including the Coalition of Nollywood Entertainers.

Shortly after the wedding, Regina Daniels was inducted into the Otu-Udu group. The community’s elder women conducted the ritual and her mother Rita Daniels attended the ceremony. This ceremony means that the community recognizes Regina as a married woman and she can now enjoy all the privileges of marriage in the community.

Celebrities and famous personalities such as Patoranking. Fathia Williams, and African China graced the occasion with their presence.. Also in attendance were actors Ejiro Okurame, Charles Inojie, Chinedu Ikedieze and Alex Usifo.

Regina Daniels made her debut into Nollywood as as a seven-year-old girl in a movie titled Marriage of Sorrow. In 2010, the movie Miracle Child launched her into stardom, when she acted alongside Ini Edo, Chika Ike and Mercy Johnson. Since then, she has acted in several movies such as Dumebi in School, Python Girl, The Bat-Man, The Jericho. She has also acted in Plantain Girl, Jaja the Great, Tears of Ojiugo, Wipe your Sorrows and Royal Covenant. She has also gone on to produce movies like The Jericho and Twins Apart.

Regina Daniels was appointed Atiku Abubakar’s Youth Campaign Coordinator on 20 January 2019. On 27 April 2019, Ned Nwoko obtained an honorary doctorate degree from Federal University of Petroleum Resources Effurun where Harrysong was the anchor of the event when both Regina Daniels and Ned Nwoko were spotted dancing together.

The actress faced criticism from fans and Nigerians over her alleged marriage to the 59-year-old billionaire.