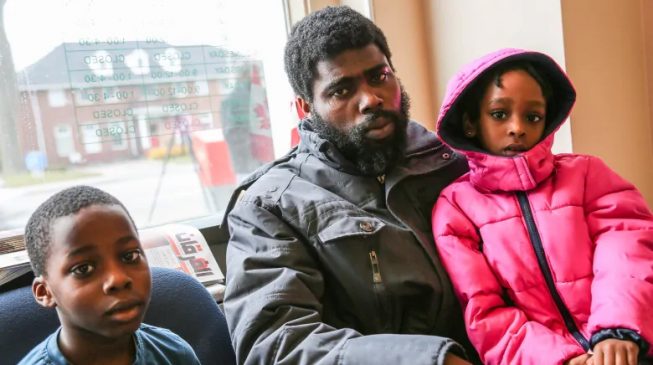 Nigerian Family Deportation From Canada; after being denied refugee status by the Canadian government.

According to CBC, the family of five was denied refugee status on Thursday and was told to leave the country by 3 pm on Friday.

Rasheedat Bakare, her husband, Afeez, son, Faaiq and daughter, Faiqah reportedly fled Nigeria and arrived in Canada in 2017. The family’s youngest daughter Farhana was born in Canada in 2018.

The family of five is calling on the Canadian government to provide any assistance possible to avoid returning home out of fear that two young girls — with another on the way — will be subjected to female genital mutilation in Nigeria.

“My children’s life, my husband’s life is at risk,” said Rasheedat.

“We ran away because they wanted to circumcise my baby girl — the one I brought from Africa. When I got to Canada, I had another baby girl. Currently, I’m pregnant with another baby girl. Now [I’ll have] three baby girls — [and all of their lives are] going to be at risk.”

Rasheeda, who is said to be five months pregnant, reportedly collapsed on Friday afternoon and was rushed to the hospital.

The development made the Canadian government issue a temporary delay on the deportation order.

Her husband said he’s not sure when he and his family will be required to leave.

“I don’t want my life and my family to be in danger. My wife is in a state where she is restless, she cannot do anything,” he said.

The family’s case reportedly caught the attention of the African Community Organization of Windsor (ACOW), a group that staged a protest on Friday outside the office of Brian Masse, Windsor West NDP MP.

Claude Saizonou, president of the ACOW, was quoted as saying his group gathered outside Masse’s office because “we’ve been through this kind of situation so many time.”

“We never react. We never say anything,” he was quoted to have said.

“And we just have [had] enough of it. We just want to stand up and say ‘If we don’t do it, nobody would do it for us.’ And this family has to stay today.”

Reacting, Masse described the federal government’s treatment of the family as “heavy-handed”, adding that it was even logistically difficult for the family to comply with the deportation order in the first place because of how little time was given.

He also pointed out that Farhana, who was born in Canada in 2018, is a naturalized citizen, which further complicates the situation.

“[There are] very significant issues related to health, personal safety and just the capability financially of being able to [leave the country],” Masse said.