Asisat Oshoala, Super Falcons captain, says being crowned ‘African women’s player of the year’ for a record fourth time is something “special” and “historic” to her. An excited Oshoala disclosed this to TheCable after the 2019 CAF awards ceremony held on Tuesday night at the Albatros Citadel Sahl Hasheesh, Hurghada, Egypt. The Nigerian international, who beat South Africa’s Thembi Kgatlana and Cameroon’s Ajara Nchout Njoya to win the award, also revealed she was too tensed to watch the event. “It is a special and historic one for me. I am really happy and grateful to God,” Oshoala told TheCable.

“I am happy and excited for being crowned for the fourth time as African best player.

“Personally, I am grateful to my team, family, team mates, national team and everyone who have been supporting me all these while.

“I was tensed and nervous because it was really a close one obviously. I could not even watch.

“I congratulate other players that were nominated, Ajara because she had a very good run in 2019. Kgatlana, a good play who had a great year as well.

“It happened that I am just the one with a little bit of edge to win.” 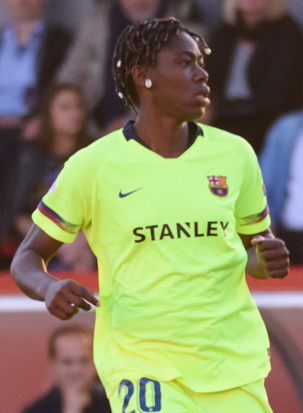 The Barcelona Femeni forward became the second woman to win it for a record fourth time – after Perpetua Nkwocha, former Super Falcons player.

Oshoala has also featured 17 times for Nigeria and scored 11 goals.