What Is Paget's Disease Of The Breast?

Paget’s disease of the breast is a rare form of breast cancer in which cancer cells collect in or around the nipple. The cancer usually affects the ducts of the nipple first (small milk-carrying tubes). Then it spreads to the nipple surface and the areola (the dark circle of skin around the nipple). The nipple and areola often become scaly, red, itchy, and irritated. The disease is named after British doctor Sir James Paget. In 1874, he noted a relationship between changes in the nipple and breast cancer.

Who gets Paget’s disease of the breast?

What causes Paget’s disease of the breast?

Doctors don’t fully understand what causes the disease. The general theory is that cancer cells from a tumor inside the breast travel through the milk ducts to the nipple and areola. This explains why Paget’s disease and tumors inside the same breast are almost always found together.

Another theory is that cells in the nipple or areola become cancerous on their own. This would explain why a few people develop Paget’s disease of the breast without having a tumor inside the same breast.

What are the symptoms the disease?

The symptoms are often mistaken for those of some benign skin conditions, such as dermatitis or eczema. These symptoms include: 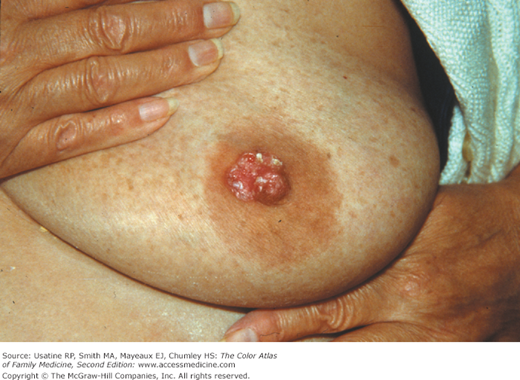 A nipple biopsy allows doctors to correctly diagnose Paget disease of the breast. There are several types of nipple biopsies, including the procedures described below.

In some cases, doctors may remove the entire nipple. A pathologist then examines the cells or tissue under a microscope to look for Paget cells.

Most people who have Paget disease of the breast also have one or more tumors inside the same breast. In addition to ordering a nipple biopsy, the doctor should perform a clinical breast exam to check for lumps or other breast changes. As many as 50 percent of people who have Paget disease of the breast have a breast lump that can be felt in a clinical breast exam. The doctor may order additional diagnostic tests, such as a diagnostic mammogram, an ultrasound exam, or a magnetic resonance imaging scan to look for possible tumors.

For many years, mastectomy was the standard surgery for Paget disease of the breast. Doctors did this type of surgery because patients almost always had one or more tumors in the same breast.

Studies have shown, however, that breast-conserving surgery is a safe option. That includes removal of the nipple and areola, followed by whole-breast radiation therapy. But these patients must not have a palpable lump in their breast. And their mammograms must not reveal a tumor.

Patients who have a breast tumor and are having a mastectomy should have a sentinel lymph node biopsy. This is to see whether the cancer has spread to the axillary lymph nodes. If cancer cells are found in the sentinel lymph node(s), more extensive axillary lymph node surgery may be needed. Depending on the stage and other features of the underlying breast tumor, adjuvant therapy, consisting of chemotherapy and/or hormonal therapy, may also be recommended.

Also read: Mums who don&#8217;t get enough sleep are more susceptible to cancer