"Kneeling Down To Propose Means Handing Over Control To The Woman," Says Pete Edochie Should we stop modern ways of proposal?

Pete Edochie has registered his displeasure about the practice of modern-day young men kneeling to propose to ladies. According to the veteran Nollywood actor, kneeling down is a western tradition that isn’t acceptable in the Igbo culture. He says that kneeling down to propose to a lady in Igbo tradition means handing over control to her.

Pete Edochie says kneeling down not acceptable in Igbo culture 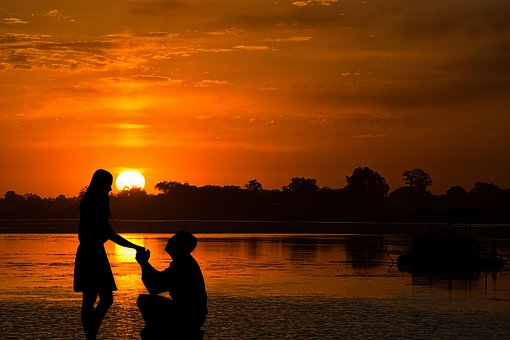 Edochie explained that kneeling down in front of a lady in Igbo tradition means handing over the authority to her. He said it means she would become the head of the family.

Speaking further, the popular actor revealed that marriage in the Igbo tradition is when a lady gives her husband-to-be wine while kneeling down. He said this tradition shows that the man has been accepted by the lady as her husband.

The actor insisted that it wasn’t like that in his days 50 years ago when he proposed to his wife, with whom he has never had any disputes. So it falls on the elders to correct young men of this generation and their adoption of western tradition.

How are proposals done in Igbo culture?

A lot has been written about the iku aka n’uzo (to knock on the door), bride price and other marriage-related practices in Igbo culture, but it is not really clear exactly how men individually went about the business of proposal in the distant past.

This is because men asked for permission from the woman’s parents first before taking any further steps. When he receives their approval, the iku aka takes place. The iku aka is done thrice, accompanied by palm wine and at least two members of the man’s family.

Then the girl’s family launches an investigation to check the man’s background and ancestry. The main reason why this is done is to make sure the man and woman aren’t related in any way. If everything goes right, the man’s family will receive a favourable response from the girl’s family.

Afterwards, a list containing the items for the traditional marriage rites is requested. The elders of the family will put their heads together to compile the list.

Do you agree with Pete Edochie? Let us know in the comment sections!

Also read: Dating In Nigeria: 5 Traditions Only Nigerians Can Relate To