New photos have emerged online of President Buhari and three of his children as they get ready to receive prominent Nigerians at their Daura home during the Sallah holidays.

Privileged Nigerians paid courtesy visits to President Buhari during the Sallah Monday holiday. They included ex-governors, senators, minister-designates, in-laws, accountants-general, accomplished women, and others. In a heartwarming photo, three of the President’s children — Yusuf, Hanan and Amina — were seen prepping their dad just before he began receiving his visitors.

The President seemed to enjoy it as he smiled broadly at his children!

Their mother, First Lady Aisha, is currently in Mecca for the holy pilgrimage.

President Muhammadu Buhari and his children -- Yusuf, Hanan and Amina, ahead of Sallah courtesy visits in Daura on Monday.

Check out the photographs, courtesy Buhari Sallau, on Instagram 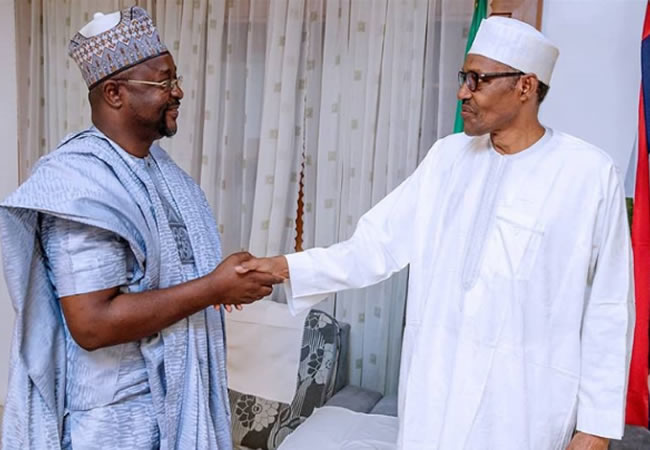 See more photos of President Buhari and visitors below:

It is easy to forget that the president of the most populous African country is also a father and a family man. Seeing photos like these from time to time gives the public a bit of insight into his life as a father. We're all the way in for it.

Born to Late Adamu Buhari, the president is the 23rd child of his parents. He has also gone on to bear 10 children between his first and second marriage. Mr President is also a grandfather many times over.

President Muhammadu Buhari on Saturday, sent out a celebratory message out to all Muslims in the country. In his address, the president commented on issues of national importance, such as security. He urged Muslims on the need for peace, among other things.

Here are seven points nobody should miss in his address:

1. Islam is a religion of peace. The president called on all Muslims to do away with violence as the religion they practice is that of peace.

3. Protect your children from extremists. The president charged parents to protect their children against extremists as they tend to manipulate children.

4. Boko Haram was borne of indifference. The president said the reason the terrorist organization became this big was because Muslims were indifferent to the activities of extreme preachers who manipulate naïve followers.

5. Terrorism and other criminal activities will be dealt with. The president assured Nigerians that his administration would deal with terrorism and other forms of crime until there is a final solution to the unrest.

6. Buhari acknowledged occasional setback in the fight against Boko Haram.

Also read: 5 Basic Principles of Islamic Parenting You Should Know