The child had zip put around her wrists as she cried and pleaded to be let go.

There was some newly released body camera footage, first published by The Orlando Sentinel this week. The videos captured jarring details of how police officers arrested six year old Kaia Rolle in September. And how they led her through the school into the back of a police vehicle, despite her anguished pleas for them to let her go. Kaia was arrested after throwing a “tantrum” at school earlier that day in which she kicked a school staff member; her grandmother previously said.

The arrest had already prompted fierce criticism of the rough treatment of young children by law enforcement. The officer, Dennis Turner, who also arrested a 6-year-old boy in a separate episode on the same day, was terminated from his job in September. 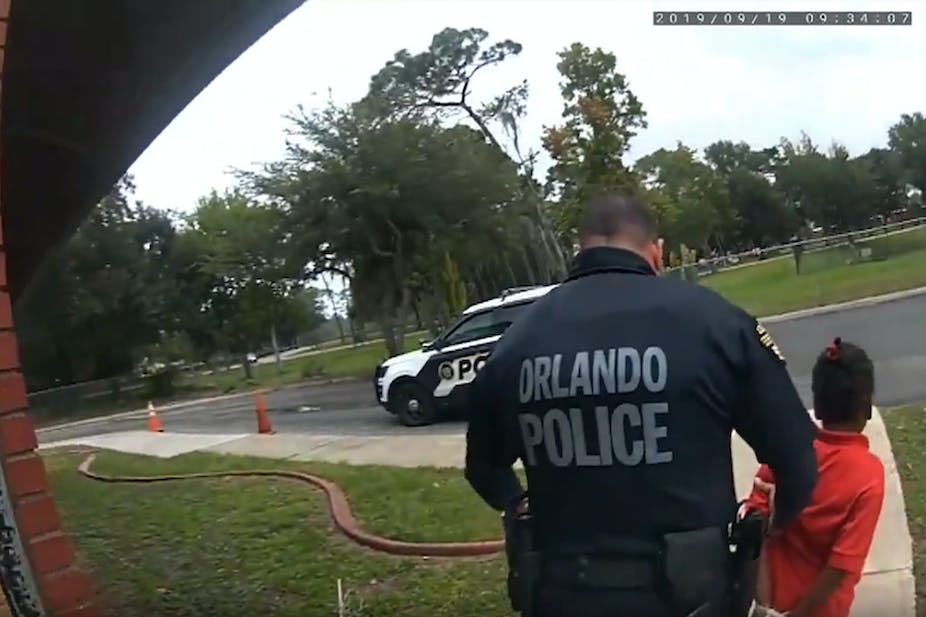 At first, Kaia Rolle, 6, appeared not to understand what the police officers were doing.

“What are those for?” she said, eyeing the zip ties the officers had brought to the school office in Orlando, Fla.

“It’s for you,” one officer responded.

As he tied them on, she started to sob: “No, don’t put handcuffs on. Help me!”

The distressing footage attracted criticisms, with some saying the arrest constituted child abuse.

“It was heartbreaking to watch this young six-year old girl pleading for help and asking for a second chance as she was being arrested,” Randolph Bracy, a Florida state senator, said in a statement on Wednesday. “The trauma this caused Kaia and her family is something nobody should ever have to go through.”

Video of the six year old arrested in school

Kaia Rolle’s family debated for almost a month about whether to release the body camera videos, according to Smith & Eulo Law Firm; the attorneys representing Rolle. Their biggest worry, the law firm says, was that Kaia would have to re-live the nightmare given that she is still “traumatized” and in “therapy.
“It’s tough for her to go to school. Every time she sees an officer she freaks out,” a member of the Smith & Eulo Law Firm told CNN. But ultimately, the family decided to release the videos for at least three reasons, explained the firm. First, the family felt it was important for the public to see the “severity” of what actually happened.
Second, the family would like the Orlando Police Department to acknowledge they dropped the ball when they decided to arrest a child. And finally, the family would like to draw attention to the case; because they want to rally support for a bill going through the Florida legislature that would raise the arrest age to 12. Senate Bill 578 was introduced January 14 by state Sen. Randolph Bracy III.

Kaia still has nightmares from her arrest in school

Kaia’s grandmother told CNN by phone that she is speaking out in support of the bill; because she doesn’t want another child to suffer the trauma of getting handcuffed and put in the back of a police car; as the videos of her granddaughter’s arrest so vividly shows. Thanks to the very disturbing body camera footage, the world now knows what truly happened.
“I’m really hurt because they stole her childhood from her,” Kirkland said.
Kirkland says that for a week and a half following the arrest, Kaia would not leave her side. And the first time she tried taking her to school, Kaia had a meltdown inside the car as they drove up to campus; because she saw a uniformed officer on the grounds.
“Grandma they are waiting to arrest me again,” Kirkland remembers Kaia saying between sobs.
Kirkland called a therapist who recommended Kaia not be forced to go to any school with a uniformed police officer. With a 2019 Florida law mandating that uniformed police be present at every public school in the state; Kirkland says she was forced to find a private school for Kaia. But Kirkland says she couldn’t afford to pay for private school. After four months and thanks to a scholarship, Kirkland says she shored up enough money to have Kaia attend private school with no resource officer on campus.
While Kaia sleeps well now after undergoing surgery for sleep apnea in October, Kirkland says that her granddaughter still has nightmares.
Mums and dads, what do you think about this arrest? Let’s know your thoughts.
CNN   New York Times
Also read: 5 Ways To Deal With Temper Tantrums In Kids