Suicide and depression: Every time these two demons rear their heads, tragedy looms.

A dedicated NHS nurse who had 'nightmares about work' committed suicide. This was after the stress of working 12-hour shifts left her unable to lead a life of her own at home.

Leona Goddard, 35, had dreams of settling down and having a family. But she struggled to have a social life after being burdened with unpredictable work hours and extra responsibilities.

Although her work colleagues rated her as ''outstanding'' Miss Goddard developed low self-esteem. It caused her to mistakenly believe she was not good enough at her job. On October 3 last year, just six months after she got a promotion. Miss Goddard was found hanging at her family home in the city's Longsight district.

She left a handwritten note across two pages of A4 paper. There, she detailed her "negative feelings, a downward spiral and feelings of self-loathing."

The Manchester hearing heard Miss Goddard wanted to work as an occupational therapist. But she studied nursing and psychology and graduated at Manchester University in 2012.

A college friend Danielle Hinds said: "Although she finished the course she never actually enjoyed the role. She felt trapped by qualifications and experience. And she didn’t want to go through university as she found it stressful.

"She wanted to explore mental health but had anxiety about whether she could handle this.

"She also struggled with shifts she got and found it difficult to maintain a social life around them.

"Leona was saving money for a house deposit. She was also looking for a home she wanted to live in. But she didn’t find anything and it was difficult for her to carry out her search because of her work shifts." 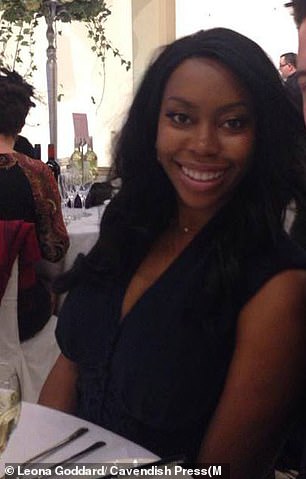 Her ex-boyfriend Peter Schaffer said: "Leona had a wish to have children one day and start a family of her own. And no doubt she would have been a great mother. But when she was working for the NHS, there was changing shift patterns; and she felt frustration at the unpredictability.

"The only reason she stayed in the job that was not healthy was a light at the end of the tunnel. There were many difficulties when she started a new position. And she had an increasing amount of responsibilities, workload, absence of training. Not long after she was signed off work.

"We had long conversations to try to help her to find other opportunities. But over the weeks, communication was deteriorating and I ended the relationship. She was upset and my intention was to give her space and then have a conversation about it. But tragically she took her own life a week later and that never materialized."

Suicide And Depression: More Friends And Colleagues Speak At The Hearing

Claire Hilton is a ward manager in charge of drug and alcohol issues at Prestwich hospital. She said: "Leona started in June 2016 and was promoted to senior staff nurse in June 2018.

"She was very capable and on August 16 and 17 performed as the duty manager. It was a very challenging time and we did speak after this. Both of us felt she was struggling in a lack of confidence in her own capabilities. Although it was not justified, she was more than capable.

"On September 7, I received a call from Leona that she had seen her GP. Her mood was low and she was feeling anxious so she was signed off for two weeks.

"She phoned on September 20 but was not ready to come back; I anticipated another sick note. On Monday I got a text asking if I was working and if free to meet that day. She said she felt low and had not been out of bed for a week beforehand.

Work colleague Sianne Donovan said: '"Leona's job pattern and shifts were a big factor in her unhappiness even before she got the promotion.

"She definitely felt unsupported and many times I told her to leave and find something else. She was looking for other jobs when she called me and was signed off when she definitely needed some rest.

"When Leona split with her boyfriend, I had never heard her so upset before. I encouraged her to get some air but she didn’t want to see anybody or want anybody to see her crying. Her death was a terrible shock, a huge loss to her friends and family.'

"She got a promotion six months before her death but I think she was in two minds about it and I was not sure she was feeling positive about it.

"The shift work, in particular, got her down as she did a 12-hour shift. Leona had not had any long term steady relationship and the most recent one ended by text message.

"Despite the fact that Leona might have been stressed at work, none of us fully realised she was feeling depressed and sad. Her death has affected the whole family deeply all miss her, asking why this happened.''

Low Self-Esteem, Suicide and Depression Are The Murderers This time Police coroners officer Marie Logan said: "Sadly Leona seems to have been suffering from low self-esteem and depression and had been off sick at work.

"She had difficulties coping with the recent promotion she had but these feelings were born out of her.

A doctor's report read to the hearing said Miss Goddard had been to see her GP in the weeks leading up to her death.

She said she felt "unsupported" and "had nightmares about work". Doctors offered her anti-depressants but she refused. She said if work "got sorted out she would feel better."

"I have considered all the evidence read and heard. It seems that Leona was under a great deal of stress going on for a long time. She had very low self-esteem and did not recognise in herself the person that everybody else saw.

"She was a young woman who made a career helping people who were in trouble and using skills that she had to best effect. It's absolutely tragic that she didn’t recognise what a wonderful person she was."

It is good to work hard, but our happiness at work also matters. If you find that you're unhappy in your job, for whatever reasons, talk with a family member, friend, colleague or try to see a psychiatrist. There's no shame in seeking professional help.

We also need to be more observant about the people around us - friends, family and colleagues. Sometimes, we may need to constantly check up on them if we notice signs of depression or unhappiness, before it is too late.