Sierra Strangfield made an incredible gesture of kindness. This was after losing her boy Samuel to a genetic condition called Trisomy 18. The illness causes developmental delays. Samuel was born at 25 weeks on September 5 at a hospital near his family’s home in Neillsville, Wisconsin.

His death naturally devastated his mother. But she determined to help other sick babies out as best she could. And she kept pumping until November 7 – the day she had expected to welcome Samuel into the world. Sierra froze her milk as she went along. Then she donated it all to her local neonatal intensive care unit.

Sierra Writes About Her Experience 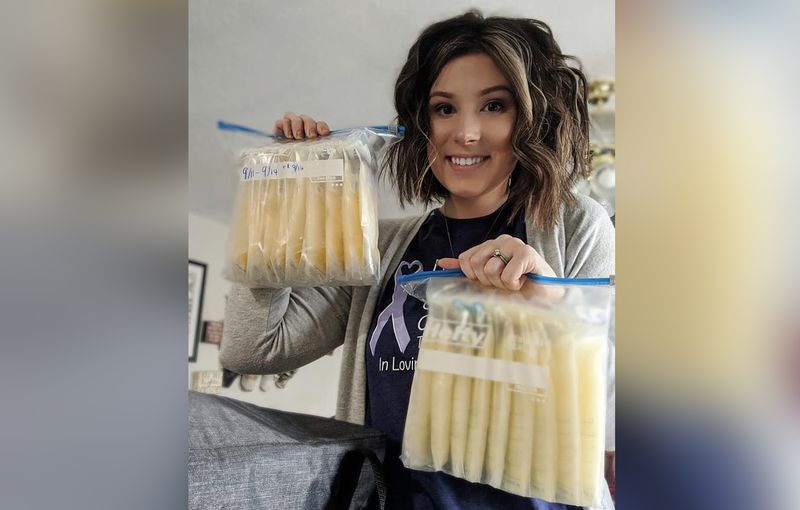 Writing on Facebook, Sierra explained: ‘When I found out I was pregnant again, I wanted nothing more than to be successful at breastfeeding. ‘But when we found out of Samuel’s diagnosis, I knew that was not going to happen.

‘Just another hope that was taken from me. ‘Before Samuel passed, I told myself I would pump my milk to donate.’ Sierra said her older daughter Porter received donor milk for months after she was born. Those women’s kindness inspired her to do the same.

She added: ‘I couldn’t save Samuel’s life, but maybe I could save another baby’s life.

‘Pumping is not for the faint of heart. It’s hard.

‘Mentally and physically. And it’s even harder when you don’t actually have a baby. ‘There were times I was angry because why did my milk have to come in when I had no baby to feed? ‘Why was I waking up in the middle of the night for this?

‘The other part of me felt it was the only thing connecting me to Samuel here on Earthside. I sure hope he’s proud of me! ‘I pumped for 63 days after his birth. I am not an over supplier by any means- but I did it.  ‘And today, his due date, I donated my milk to the NICU milk banks for the first and last time. ‘Walking through the hallways of the hospital was just another step in healing. And I know, (because I felt him), that Samuel was there with me.’ Sierra’s post was widely shared online, with over a thousand people praising her selfless act of kindness. She says she has been wowed by the response, and now hopes to raise further awareness of Trisomy 18.

What you should know about Trisomy 18

Trisomy 18 is a chromosomal abnormality. It's also called Edwards syndrome, after the doctor who first described it.

Chromosomes are the threadlike structures in cells that hold genes. Genes carry the instructions needed to make every part of a baby's body.

Sometimes the mother's egg or the father's sperm contains the wrong number of chromosomes. As the egg and sperm combine, this mistake is passed on to the baby.

A "trisomy" means that the baby has an extra chromosome in some or all of the body's cells. In the case of trisomy 18, the baby has three copies of chromosome 18. This causes many of the baby's organs to develop in an abnormal way.