What Is A Diastema: Natural Beauty Or Dental Defect?

In many parts of Africa, a diastema is considered a thing of beauty, fertility, and virility. Every one is truly unique and beautiful in their own way. But in actual fact, it is a dental condition that you may need or may not need treatment for.

For centuries, Africans have considered diastema as a sign of beauty. In East Africa, people believed that women with diastema were the most attractive and the most fertile. In 2020AD, and with the advent of the internet, the continent has experienced immense enlightenment. But concerning diastema, not much has changed. Instead, diastema has become a sought after practice in beauty enhancement establishments. What is a diastema, and is it hereditary? We'll dissect this and more below. Take a look!

What Is A Diastema?

It is a space or gap between any of your two teeth. And a diastema often shows up between the two upper front teeth. But these gaps can show up between any two teeth. In Nigeria, the Yorubas refer to a diastema as 'eeji', but if you're no stranger to the African continent, you might have heard of the term "gapped tooth" or tooth gaps very often. The size of your teeth and jaw bone can be determined by genetics, so diastema can run in families.

Some gaps are small and barely noticeable, whereas other gaps are larger and a cosmetic issue for some people. If you don’t like the way the gap looks, there are ways to close it or reduce its size.

In Nigeria, tooth gaps symbolize beauty and luck; and in the Caribbean, they're associated with sexual allure.  Some other parts of Africa associate tooth gaps with fertility, sexual prowess and virility. Africa's citizens also believe a tooth gap signifies wealth. What we don't think about is that diastema is a medical condition. And just like most medical conditions, it has causes, and it can be treated.

Spaces develop for a few other reasons as well.

What Causes A Diastema?

What Are The Symptoms Of A Tooth Gap?

There are no symptoms for a diastema that occurs because of a mismatch between the teeth and the jaw. But spaces caused by a tongue thrust habit or periodontal disease tend to expand or grow with time. The teeth may become loose, and discomfort or pain may occur, particularly during biting or chewing.

You may notice a space when brushing or flossing. And your dentist can see spaces during an examination. If the gap was caused by a mismatch between the permanent teeth and the jaw size, you can expect the spaces to remain throughout life. Gaps caused by a tongue thrust habit or periodontal disease can get larger with time. 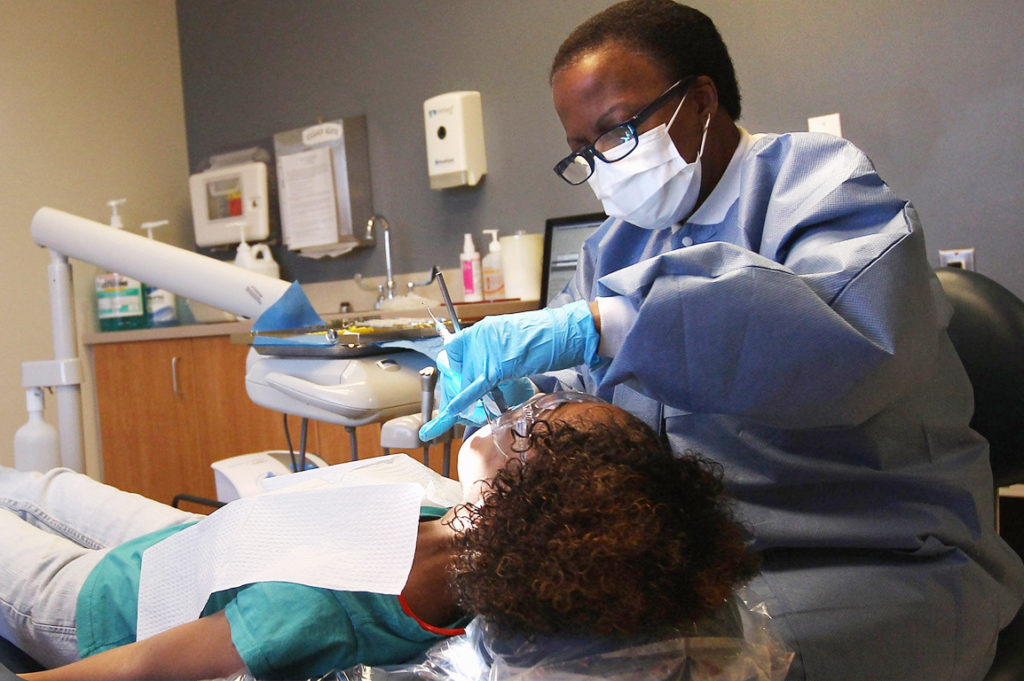 Braces: Some people get braces, which move the teeth together. Often, no matter where the diastema is, you must wear a full set of braces, on both your upper and lower teeth. That's because moving any tooth affects your entire mouth.

Crowns, Veneers, Bonding: If your lateral incisors are too small, your dentist may suggest widening them using crowns, veneers or bonding.

Implants: If you have a space because you are missing teeth, you might need more extensive dental repair. This might include dental implants, a bridge or a partial denture.

Surgery: If a large labial frenum is causing the gap, the frenum can be reduced through surgery called a frenectomy. If you get a frenectomy done on your younger child, the space may close on its own. And if it is done on an older child or an adult, the space may need to be closed with braces.

If the gap is caused by periodontal disease, then periodontal treatment by a dentist or gum specialist (periodontist) is necessary. When gum health is restored, in many cases braces can be used to move the teeth into place. A splint can be used to attach teeth to other teeth and prevent them from moving again. In some cases, a bridge will be required to close the spaces.